Fossils
Reptile, Amphibians, Synapsids Fossils
Dimetrodon
Dimetrodon is an extinct, synapsid from the early Permian Period. They are often portrayed as Dinosaurs but are more closely related to mammals. They are characterized by their alligator like body with a large sail (elongated dorsal spines covered with tissue). Most Dimetrodon fossils come from the Southwest United States.
Try the parent category 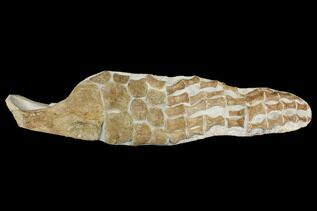 What Is A Dimetrodon?

Dimetrodon is an extinct Genus of synapsid from the Permian Period. There are 20 known species. They are not true reptiles as they have one temporal fenestrae (hole) behind each eye socket. Reptiles have two. Dimetrodon is more closely related to mammals than reptiles. Dimetrodon was likely the apex predator of the Permian.

When Did Dimetrodon Live?

Dimetrodon was a large, sail backed creature with a crocodile like body and small head. The sail was long spines growing from the vertebrae, covered with skin. There is debate over what the sail was used for. It has been commonly held that the sail was used to regulate body temperature, absorbing and radiating heat as needed. It has also been proposed that the sail was used as a mating display to attract mates. In addition to its sail, dimetrodon had a small, stout head, a long tubular body and splayed stance (Legs out to the side of its body). Recently, scientists have begun to challenge this lumbering stance. Trackways in New Mexico seem to show Dimetrodon stood taller with its legs more under its body rather than out to the side like an alligator.

Is Dimetrodon A Dinosaur?

Where Are Dimetrodon Fossils Found?

Almost all Dimetrodon fossils have come from the Southwest United States. Most of these come from and area along the Texas Oklahoma border called the Red Beds. all commercially available dimetrodon fossils still come from this area. In recent decades Dimetrodon has been found in the Four Corners of Utah and Arizona, Ohio and a new species was found in New Mexico. A find in the Thuringian Forest of Germany is the only non North American Dimetrodon.