Approximately 50 million years ago during the Eocene period, three huge lakes covered parts of Southwest Wyoming. The fine grained sediments that collected at the bottom of these lakes preserved the fossils of millions of fish, plants, insects, reptiles and other flora and fauna. These sediments which has since turned to stone are now part of the Green River Formation. 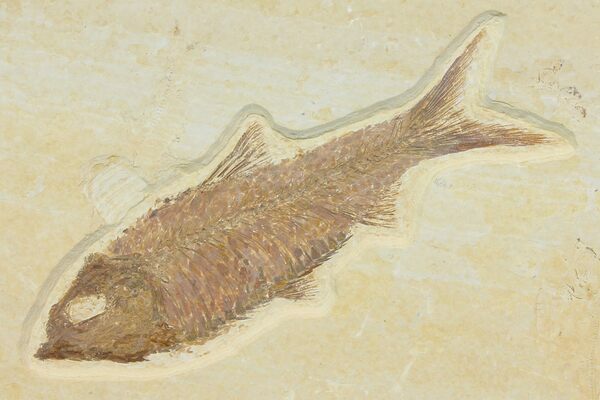 A nicely preserved Knightia from the Green River Formation.


The most common fossil fish found in the Green River Formation is Knightia. Knightia was a herring-like, schooling fish which averaged about 3-4 inches in length, though it could grow up to 10 inches long. Like many modern freshwater fish Knightia had four fins, ones on its back, stomach, pelvis, and anus. It would have eaten plankton and algae and was a food source for many of the larger fish like Mioplosus and Phareodus that also inhabited the lake.

The first Knightia fossils were discovered in the 1840's by missionaries and explorers traveling through the region. There the genus was named after Wilbur Clinton Knight, the first state geologist of Wyoming.

Today, fossils are collected at several commercial quarries around the town of Kemmerer, Wyoming. Tens of thousands of Knightia are collected each year, and they are so abundant it’s not uncommon to find more than one on a single rock in some layers. Several of these quarries offer pay-per-dig opportunities to the public, so you can visit Wyoming and collect your own Knightia. We also have many for sale in the fossil fish section of our website.