Why Do Fossils Come In So Many Colors? 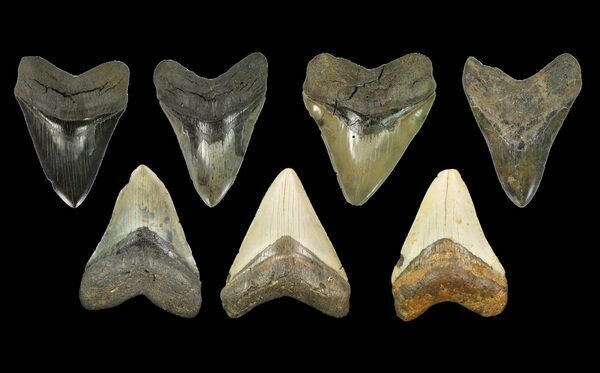 Fossil Megalodon teeth showing a wide range of colors. They were all originally ivory white, like modern shark teeth before being fossilized.

The basic process of fossilization deals with mineral replacement as remains, such as bone, sit buried in the ground. Pressure from being buried in the ground causes minerals, which are naturally dissolved in ground water, to seep into the bones, precipitate, and fill in the microscopic gaps. The organic, or original, material in the bone breaks down over time while minerals fill in those empty areas where the organic material once was. In the end, the bone retains very little, if any, organic material, and instead, is full of hardened minerals. As a result, the weight of the bone dramatically increases and the color changes to that of the replaced minerals.

Since minerals come in a plethora of colors, fossils also come in a wide variety of colors. Some examples include phosphate, which is a common mineral to replace shark teeth. Phosphate is a jet black mineral. If phosphate replaces the original material, the fossil will be black. Areas with lots of iron in the ground will produce red and orange colored fossils. Also, areas with gray clays and limestone will give a gray-green or gray-yellow color, like the shark teeth in North Carolina.

It gets more complicated than the simple explanations above. There are added nuances to consider, such as original material density, pressure, heat, chemical reactions, time buried, saturation, acidity, and more. For example, if one looks at shark teeth, they have very dense dentine making up the crown and very porous material making up the root. Because of this, less minerals will replace material in the crown than in the root. This uneven mineral replacement will produce a difference in color and hardness of the shark tooth root vs crown. 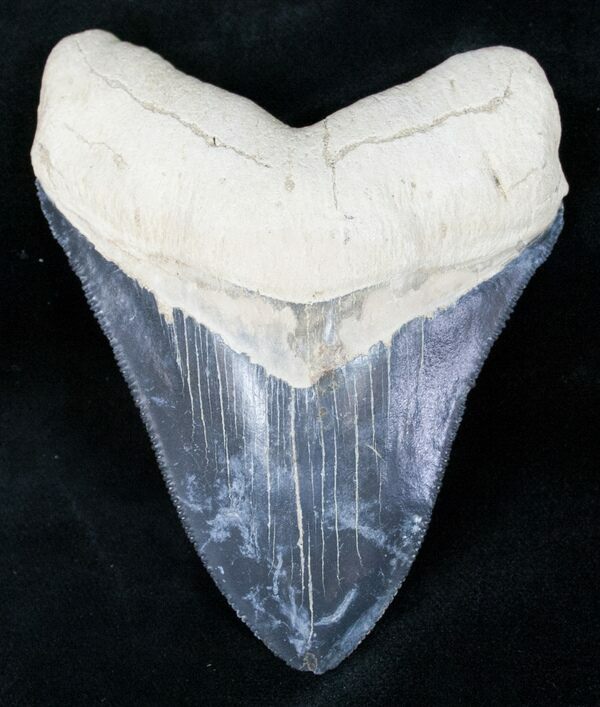 A fossil Megalodon tooth from Florida showing this phenomenon where minerals leached from the more porous root after fossilization leaving it a different color than the crown.


Another example of complications deal with the large amount of time fossils have been buried. Over millions of years, many different minerals can seep into and out of fossils, each imparting different colors. An interesting example of multiple mineral replacements come from white plant fossils on black shales that are found in areas such as central Pennsylvania and parts of Germany. These plants fell into oxygen poor waters and were rapidly buried by fine gray sediments. The plant-filled sediments eventually subducted deep beneath the ground where heat and pressure cooked the plants, leaving an ash like black carbon film. Pyrite in the ground replaced this carbon film and created orange plant fossils. However, later, through oxidation and replacement reactions, the pyrite was replaced by a white substance called pyrophyllite and many of the orange fossils turned white. Today one can find these beautiful white fossils preserved on black shale.


Sometimes, there are streaks or “lightning” patterns on fossils, such as shark teeth. Fossils resting against another object underground, such as pebbles and roots, cause this. Tiny tree roots that grow against the fossil will leach minerals away, making the color lighten. When the fossil erodes out, the tiny tree roots come off, and what is left are little lightning patterns. 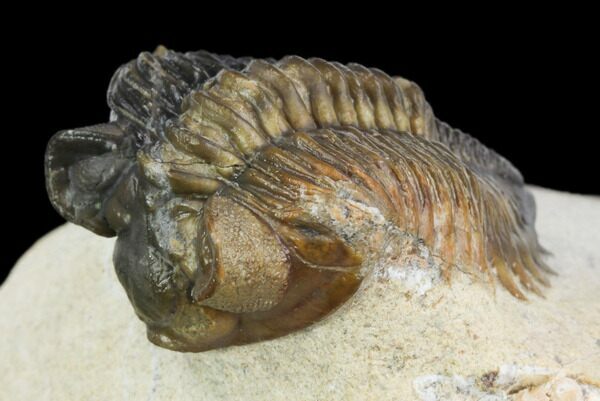 A Coltraneia trilobite fossil with a multi-colored shell. This is due to one side of the trilobite being closer to a fault in the rock. Heated water flowing through this fault either leeched mineral from the shell and/or deposited new ones causing the change in color.

Actual colors can sometimes be preserved

Sometimes, a small amount of original material remains in a fossil. This organic material gets trapped between the minerals. Usually these organic patches are only microscopic bits, but with today’s advanced techniques combined with electron microscopes and ion mass spectroscopy, paleontologists can study chemical traces left by these minute amounts of original material and deduce all kinds of information about the animal, and sometimes even the color. Using these modern techniques, well-preserved feathers and skin have been found to have melanosomes with pigmentation preserved and paleontologists can deduce the animal’s colors and color patterns.

Great examples of color preservation include Mosasaurs and Dinosaur feathers. A mosasaur with well-preserved skin patches show it had dark pigmentation. This means mosasaurs were a very dark grey or black color, similar to sperm whales (Lindgren et al. 2014). 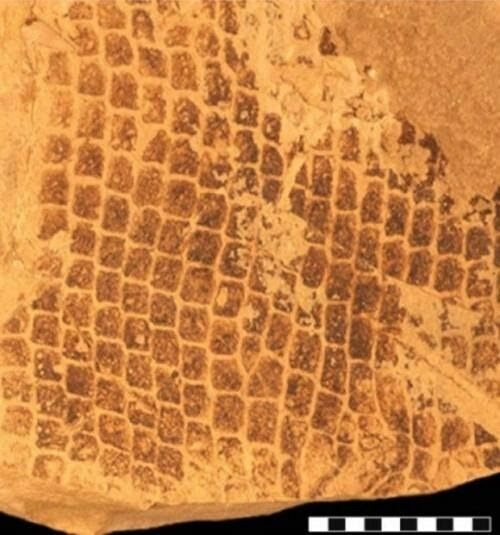 Fossil scales of the mosasaur specimen: SMU 76532 where the melanosomes were found. They indicate the mosasaur had a dark coloration, like a sperm whale. Image by Johan Lindgren (Lindgren et al., 2014).


A few dinosaur color schemes have also been determined. Structures in the feathers of the theropod Sinosauropteryx have pigments that show it had orange feathers with a striped tail (Smithwick et al. 2017). The dinosaur called Anchiornis huxleyi had a body that was mostly black with white accents and had a dark orange headdress and freckles on its head (Li et al. 2010). 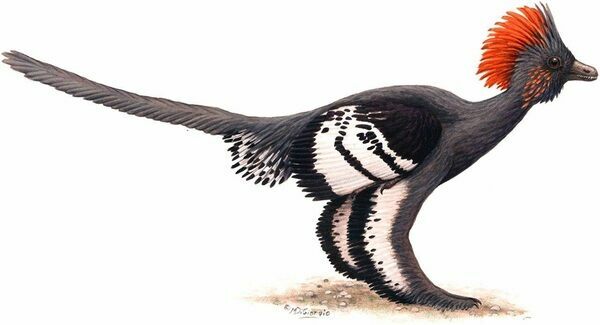 Reconstruction of the plumage color of the Jurassic dinosaur A. huxleyi. Color plate by M. A. DiGiorgio / Figure 4 from Li et al. 2010

Fossils have a wide array of colors not due to the original color of the organism, but because of the complicated mineralization process. Some types and patterns of colors are highly sought after by collectors and greatly increases the value of a fossil. A mottled red shark tooth from the “Fire Zone” in Bakersfield will be much more valuable than a similar jet black tooth from South Carolina. When you have time, look at the colors of your fossils and imagine all the different processes they went through! 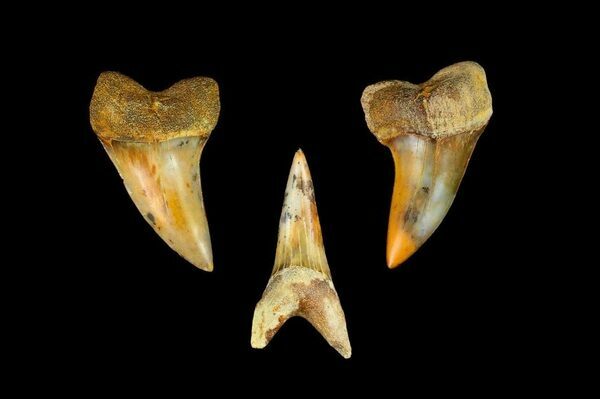 C. Planus Shark teeth from the “Fire Zone” at Bakersfield, CA. The name comes from mottled red appearance of the fossils found in the layer.