FOSSILERA
MINERALS
FOSSILS FOR SALE
NEW
CRYSTALS
ABOUT
Minerals & Crystals
Kyanite
Kyanite is a blue, silicate mineral with the chemical formula Al2SiO5. It's known to be one of the most attractive natural minerals in the world, frequently found with lustrous blue bladed crystals, with the intensity of color varying by location of extraction. Kyanite regularly forms fibrous, radiating crystals, as well as flattened and tabular. Some crystals form with white striations, color bands, and even multi-colored crystals, though it's typically found with a deep blue streak running down the middle.
Try the parent category

How Does Kyanite Form?

Kyanite is classified as an aluminosilicate mineral (composed of aluminum, silicon and oxygen) that forms as a result of high pressure metamorphism of sedimentary rock. This alteration typically occurs to aluminum rich clay deposits and/or pelitic (fine grained) rocks that undergo metamorphism under high pressure. Because of this, kyanite is most often found in gneisses (metamorphosed sedimentary rock) and schists that formed primarily from sedimentary rock, though it is also occasionally found in quartzite formations.

The environment of formation is key to producing kyanite crystals, for alterations in temperature and pressure can morph kyanite into different crystals. If the temperature is too high during crystal formation, kyanite will form as sillimanite (polymorph of Al2SiO5, same chemical formula as kyanite). If temperatures are low but pressures are too low for kyanite formation, the crystal that forms in place is andalusite (also a polymorph of Al2SiO5).


Where Is Kyanite Found?

Nepal is regarded as one of the leading producers of some of the most beautiful blue colored kyanite crystals found to date.

Are There Alternative Names For Kyanite?

Disthene: Named after the Greek words for "strong" and "two" which refers to the crystals varied hardness in two separate directions.

Cyanite: The old spelling of kyanite that was popular through the 19th and early 20th centuries.

Is Kyanite A Natural Mineral?

Yes, kyanite is found all around the world, typically in aluminum-rich deposits that have undergone a significant amount of high pressure sedimentary rock metamorphism.

The environment necessary for the formation of kyanite makes it extremely difficult to be grown synthetically. That being said, blue glass that resembles kyanite exists, however due to the abundance of kyanite, coming across "fake" kyanite is very unlikely. Probably the worst thing that you'll come across when dealing with kyanite vendors is crystals that have been covered in a layer of oil to enhance the color.

Blue kyanite is considered to be the most common color of kyanite, however the vibrancy of this color can play a role in its rarity. Colorless kyanite crystals are the rarest to find, though they're not regarded as being the most valuable.

What Colors Can Kyanite Be?

Kyanite crystals are commonly found to be colorless, blue, orange (only known from one location in Tanzania), green and black, while in rare cases purple kyanite crystals have been found. Crystals with transparent blue edges and a deep blue streak that runs down the middle, are considered to be the more highly sought after color combination.

Blue Kyanite: The most common color of kyanite. A blue kyanite crystal can be a consistent blue throughout, or often contains zoning in which the crystal will have a streak of deep blue through its center.

Green Kyanite: A green variety of kyanite that can often be found in quartzite. Avery County in North Carolina is known as one of the localities that produces these green kyanite crystals.

Teal Kyanite: A teal variety of kyanite that is found in the Umba Valley of Kenya.

Orange Kyanite: So far only found in Tanzania, this variety of kyanite gains its color from manganese impurities.

Colorless Kyanite: A rare form of kyanite in which the crystal presents no color.


How Can Kyanite Be Identified?

The elongated columnar structure of the crystal, combined with its blue color are often good indicators of the mineral. Another good identifiable characteristic of kyanite is its unique hardness (the minerals susceptibility to being scratched) which varies based on the direction of scratch testing along the crystal.

Other identifiers are the minerals that are found associated with the crystal. Aside from the surrounding metamorphic rock, associations of quartz, almandine, biotite and mica are very common.

What Is Kyanite Used For?

Kyanite can be helpful in explaining the geologic process of a rock formation. When geologists discover kyanite in a location containing metamorphic rock, they can deduce information regarding the depth, temperature and pressure of the host rock's formation.

Kyanite's heat resistant properties make it an excellent combination material for the manufacturing of heat resistant porcelains. Some common items that this kyanite infused porcelain is used in are sinks and other various bathroom fixtures, porcelain dentures, as a binding agent in cutting/grinding wheels and even as the porcelain insulator of spark plugs.

It is also often used as a decorative piece, though seldom will it be used as a gemstone for its natural perfect cleavage results in the crystal breaking easily, making it difficult to facet. It has also become popular with the metaphysical and healing crystal community as an energy balancing stone. 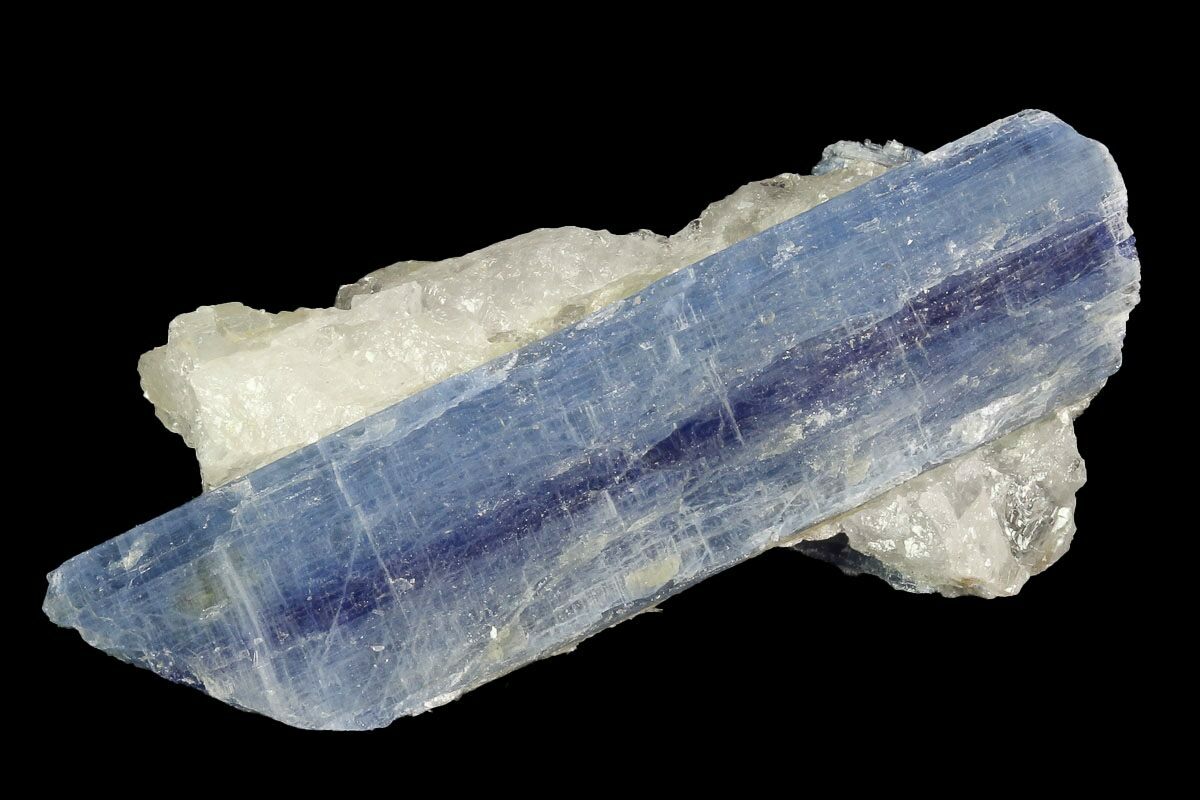