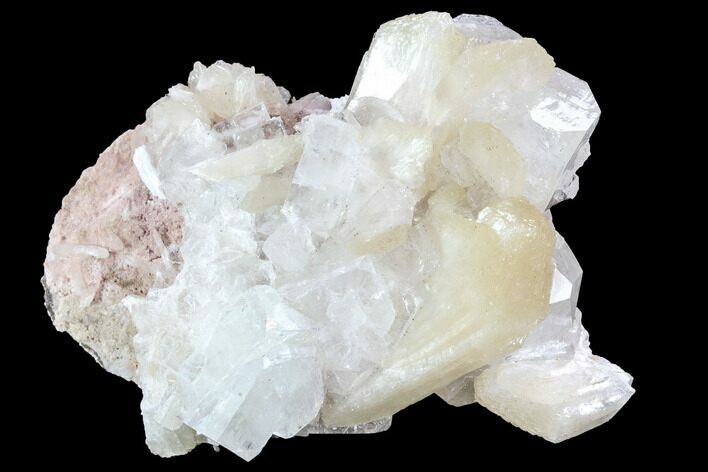 This is a gemmy specimen of zoned apophyllite and stilbite from Maharashtra, India. This mineral association consists of translucent, colorless zoning of excellent apophyllite crystals with a scattering of peach colored stilbite crystals.

Stilbite is probably the most common zeolite found in these deposits. Crystals often form flowery, bowtie or hourglass shaped structures and come in a variety of colors. Some of the most beautiful colorations are the pink or peach tints. Apophyllite while not a zeolite itself is almost always found associated with zeolites in the same pockets. It has two crystal habits, a rectangular prism capped by a steep four sided pyramid or a pseudo-cubic structure. While not a well known mineral to the general public it is popular among mineral collectors due to it's pastel colors and beautiful crystal formations.
SOLD
DETAILS
SPECIES
Apophyllite & Stilbite
LOCATION
Bombay, India
SIZE
3.8" x 2.8"
CATEGORY
Zeolites
SUB CATEGORY
Apophyllite
ITEM
#92244
SHIPPING
Shipping & Return Policy info.