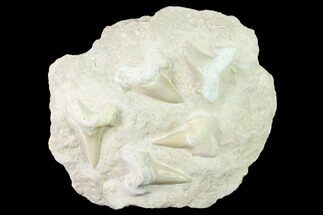 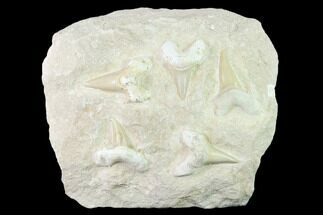 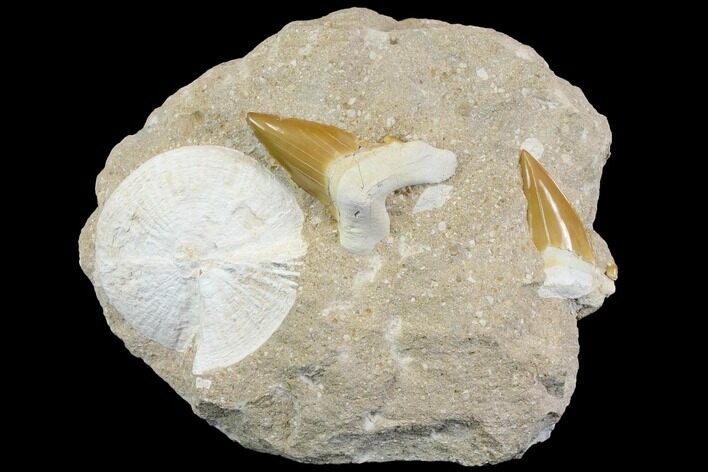 This is a 8.9" wide specimen that contains two, very large teeth of the extinct giant mackerel shark, Otodus obliquus, collected from the phosphate deposits in the Oulad Abdoun Basin of Morocco. They are Eocene in age, or approximately 54 million years old. For the most part the teeth are in excellent condition, however there is a repaired crack through each tooth. There is a partial shark vertebra that has been exposed from the sandstone as well. This piece is natural and not a composite.

The largest tooth is 3.3" long. Comes with a display stand.

Otodus is an extinct mackerel (Lamniformes) shark that lived during the Eocene, approximately 54 million years ago. This is the same family of sharks that includes the Great White and there were likely a distant ancestor to the Megalodon. These teeth are collected during phosphate mining operations near Khouribga, Morocco. While teeth of Otodus are common fossils at these mines, large, good quality specimens are hard to find as they are often destroyed by the mining equipment. 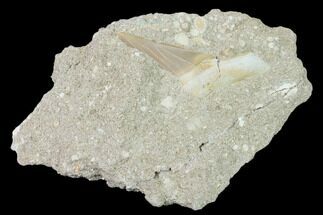