Fossils
Reptile, Amphibians & Synapsids
Crocodile
HERE ARE SOME OTHER SIMILAR FOSSILS FOR SALE 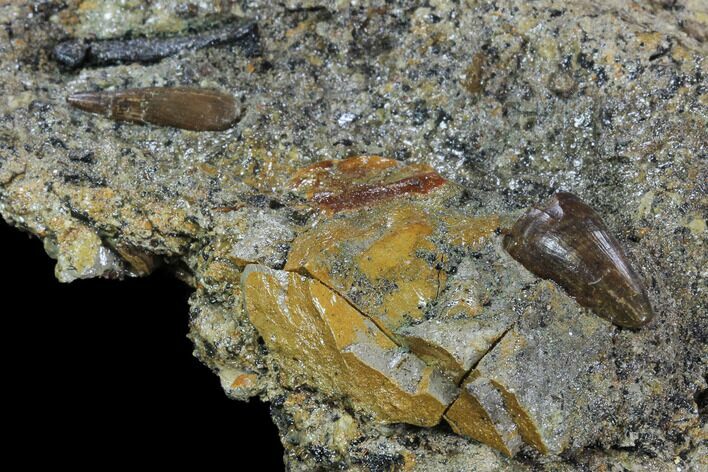 This is an association of a .6" long tooth of the monster crocodile Deinosuchus riograndensis, and a .68" tooth from a crocodile of the genus Goniopholis, collected from the Aguja Formation of Texas.

Deinosuchus riograndensis was a huge crocodilian that reached sizes of 30-40 feet long, making it the apex predator of it's time and allowing it to snack on dinosaurs. One could imagine the epic, riverside battle that may have occurred between this fearsome predator and the Tyrannosaurs that also inhabited the region.

This specimen was collected within the past year on private deeded property in Brewster County, Texas. You won't see any other dinosaur material from the Aguja & Javelina Formations for sale because nearly all of the formation lies the borders of a national park or in Mexico which can not be collected. One of our partners was lucky enough to purchase several hundred acres of ranch land in Texas containing a good exposure of these formations.

These formations are equivalent age to the Judith River Formations in the Northern US/Alberta. Because relatively little collecting has been done on these formations in Texas most of the species remain undescribed. Our partner has been putting important material into research collections and working with museums and researchers, so in the coming years their work will help lead to these dinosaurs being formally described.
SOLD
DETAILS
SPECIES
Deinosuchus riograndensis & Goniopholis sp.
AGE
Late Cretaceous, Maastrichtian Stage